Searching for the unknown Holocaust in the former Soviet Union

A documentary project by Boris Maftsir

On June 22, 1941 – The German and Romanian armies attack the USSR on the southern part of the front. The Romanians aimed to return to the Dniester River and regain control of Bessarabia and North Bukovina which were taken from them in the summer of 1940 by the Soviets. In late August 1941 the Germans grant the Romanian government the region on the east bank of the Dniester River, or as it is known in Romanian – Nistru. Hitler names this area – Transnistria. The film “Beyond the Nistru” depicts some of the Holocaust events that took place during the first year of the greatest patriotic war in Romanian occupied Soviet Union territories.
Episode 1 – Revenge of the Romanians – Depicts the pogroms and assassination of Jews in Moldova (Bessarabia) from the onset of Operation Barbarossa on June 22, 1941 until the beginning of the deportation of Bessarabia and Bukovina Jews to Transnistria.
Episode 2 – Purification – Depicts the deportation of Jews from Cernauti and other towns in Bukovina and their suffering and death until they reached the ghettos of Transnistria.
Episode 3 – Typhoid Outbreak – The winter of 1941/42 in Transnistria and in the Bershad and Shargorod ghettos – the death of tens of thousands of Jews from typhoid, freezing cold and starvation.

** if you have an active subscription to the platform, you can skip the following message**
The film is available for free, for personal viewing, which includes a watermark. To watch it, simply click on the Play button above.
If you'd like to watch the film in higher quality and without a watermark, please click on Rent and choose the rental period.
For institutional use and public screening, please click on Download and choose the appropriate license. 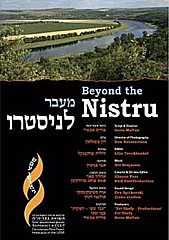