Until The Last Step

Searching for the unknown Holocaust in the former Soviet Union

A documentary project by Boris Maftsir

Towards the end of winter 1941-42 almost all of the campaigns of the murder of the Jews in Eastern Belarus were already complete. In many places in western Belarus, there were still ghettos.
This film describes some of the events of the Holocaust in Belarus between summer 1942 and until the destruction of the ghettos in the fall of 1943.
The town of Lachva in Belarus is actually more of a village than a city. In its center is the only food store and a memorial to the Red Army soldiers. In a shady spot is a memorial stone for the murdered of the ghetto – with an uncharacteristic dedication-  Honor and Glory. This memorial was erected to memorialize the uprising in the Lachva ghetto, which was one of the first such uprisings against the German invader. The rebels had not chance. They knew their fate was doomed, but they chose how to die. The uprisings in Lachva and in other ghettos in shtetls surprised the oppressors. For the first time they came upon Jews who were willing to resist. Until the Last Step presents stories of heroism and death in the ghettos of Nesvitch, Lachva, Gluboki and the brave story of escape through a tunnel in the Novogrudek ghetto. The film also exposes the Nazi’s attempt to obscure the massacre of Jews that was taking place.

** if you have an active subscription to the platform, you can skip the following message**
The film is available for free, for personal viewing, which includes a watermark. To watch it, simply click on the Play button above.
If you'd like to watch the film in higher quality and without a watermark, please click on Rent and choose the rental period.
For institutional use and public screening, please click on Download and choose the appropriate license. 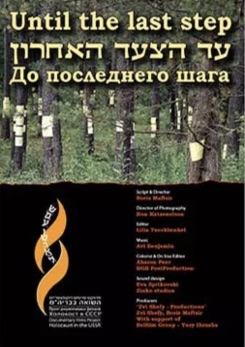